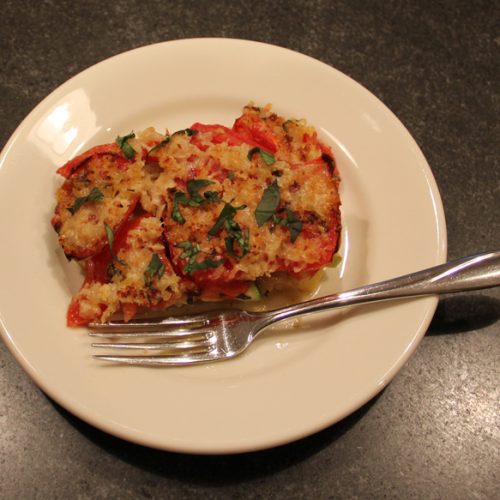 This recipe takes time but its layers of squash, caramelized onions, tomatoes, and Parmesan- bread crumb topping pack in a lot of umami. It is also very pretty and therefore great for guests, including a buffet or potluck. Pairs well with grilled meats or fish.Based on a recipe by Rebecca Hays, Cook Illustrated, July & August 2008, p 13.

The first steps in this recipe are to help reduce the amount of liquid generated by the squash and tomatoes - don't skip. Even following the directions results in extra liquid at the bottom of the baking dish. It might help to try and drain more liquid out of the zucchini and tomatoes by salting earlier and allowing to sit longer. To make this recipe earlier in the day you intend to serve it, follow all instructions up to the point the baking dish is placed in the oven. If serving as part of a meal for guests, pair with simply prepared meat or fish; ie. roasted or grilled. Steamed corn or roasted potatoes also pair well.